Warning: A non-numeric value encountered in /srv/disk1/2695314/www/destinoviajante.com.br/wp-content/themes/tilt/dynamic-styles.php on line 718 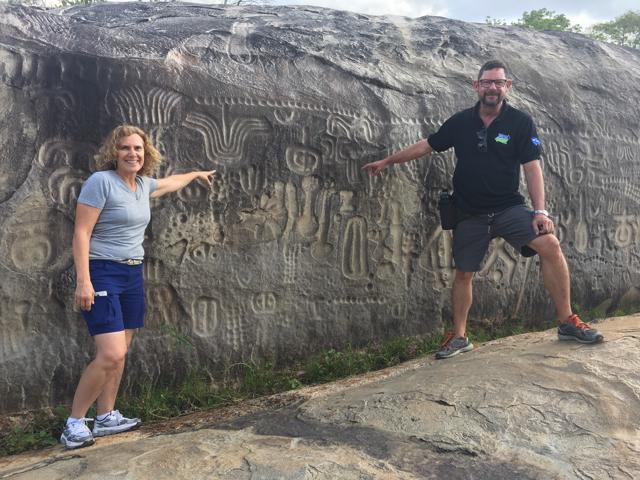 Located only 45 km away from the city of Campina Grande, the Ingá Stone is a site that doesn’t yet belong to the UNESCO’s World Heritage List but is already part of the Tentative List. This list refers to all sites that have been registered by the state parties, so they can be judged by a commission and then enter or not the official World Heritage List.

Despite the site not being the part of the World Heritage list, it has been protected as a cultural heritage by IPHAN since 1944, being the first rock art monument protected in Brazil and the only one that is also recognized for its artistic content. Defined by archaeologist as Itacoatiara, which means in Tupi-Guarani language “painted stone”, the main rock is 24 meters long and 3.8 meters high. The three main panels have drawings engraved on it. The engraved symbols resemble human and animal figures, wavy lines that refer to the movement of water and other images.

Even after several studies of the site, the origin of this inscriptions is still unknown, whoever, this is the best-known rock engravings of Brazil. There are several theories about its origin, going from hidden treasures to extra-terrestrial theories. However, some historians believe that the inscriptions were made by indigenous communities that inhabited the region around 6,000 years ago. The fact is that we will probably never know the real origin of these inscriptions. The weather conditions, such as rain, occasional river floods, and even the sun, wear out the rocks over the years, making it harder to study and identify exactly when or by whom the drawings were made.

According to the application text to the UNESCO’s Tentative List, the Itacoatiaras of the Ingá River fit into two selection criteria. The rock art panels are an expression of the creative genius and the records have a great importance in the archaeological and anthropological studies. In north-eastern Brazil this type of panel expression appears before 10,000 BC and its enormous amount shows an intense human occupation process in the region during the prehistoric period, making this site an exceptional and tangible testimony of the occupation process in this part of the Americas.

Inside the complex there is the Natural History Museum with some quite interesting pieces. Its was founded in 1996 and has a collection with animals fossils that were extinct over 10 thousand years and a wale skeleton that came from the Paraiba’s coast and is from the triassic era (between 251 and 199 million years ago).

*Triassic (or Triassic) is a geological period that stretches from about 250 to 200 (millions of years ago). It is the first period of the Mesozoic Era and is between the Permian and Jurassic. The beginning and end of the period are marked by events of mass extinction.